Hello everyone and welcome back to the Upstream blog!

So, you’re looking for a Cardano staking pool, but what are all those statistics and icons that Yoroi wallet shows you when you’re trying to choose? Well, today we’re going to to break it down to help you understand the key staking pool indicators and make sure you don’t make any mistakes when choosing which staking pool to delegate your ADA to (ahem! UPSTR).

searching for a staking pool

If you’re not looking for a specific pool you can simply scroll through the seemingly endless list. Well its just over 3,000 pools now actually. But, you might already know the pool you’re going to stake to. For example maybe you’ve seen their awesome Cardano content, found them while researching online, or been recommended a cool pool by a friend. You can search for that pool directly using the search bar in the Yoroi Wallet delegation centre. Just type the name of the pool, hit search and it will show up.

When you’ve hit search on the Yoroi app you’ll see this screen pop up showing your results. 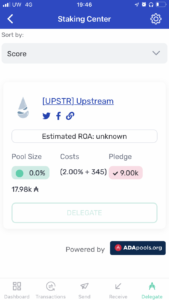 This is an overview of the staking pool’s key stats. The first thing you’ll notice is the logo on the left hand side, the letters in those [square brackets], followed by the pool name. The logo is pretty obvious really and the letters in square brackets are called the pool ticker. This is the unique short name for the staking pool that identifies it on the Cardano blockchain.

What are all those icons?

Under this first lot of info you’ll see social media icons which are actually clickable links to social media platforms that the pool operator is active on. For example with Upstream you’ll see we’re active on twitter primarily and also facebook. Next to the social icons there is also a link to the staking pool website. If the pool you’re looking at doesn’t have a decent website with recent updates or an active presence on social media, we’d recommend you start looking for another pool. More on that later.

The next indicator that you see is called Estimated ROA. If you have dabbled with trading or investing at any point you might recognise this one. ROA is usually short for “Rate On Assets” and on Yoroi it’s effectively the same thing but just renamed “Rate On ADA” for obvious reasons. The Rate On ADA is a guideline percentage estimate of the expected returns on your ADA investment over the course of a 12 month period. With almost any Cardano staking pool you should expect to receive an average of 5% APY.

What about Pool Size?

Next is the Pool size. This represents how much of the total supply of ADA is staked in that particular pool as a percentage. ADA has a total supply of 45,000,000,000 coins and each staking pool on the Cardano network has a staking limit of 64,000,000 ADA. This limit is known as the saturation point. Because of the way the saturation point is designed into the Cardano staking protocol, this number will rarely read more than 1%. The number that is shown directly above this (or below if you’re on the mobile app) is the exact amount of ADA delegated to that particular pool.

Costs can actually be a bit confusing so if you don’t understand it don’t worry, you’re not the only one! The question below was posted on the Cardano forum. You can read the full post and the very helpful replies here. We love how helpful the Cardano fam is!

Here’s the question: “Hi. Please could someone clarify the cost of staking. I understand that a fee/tax must be paid per epoch as a percentage however when calculating potential returns on my investment I am confused regarding the 340 ADA standard fee. If I pay 340 per epoch as I have heard, if I only have a modest stake of 5000 ADA then my fees would be greater than the return. Am I misunderstanding something? It’s widely stated that any number of ADA no matter how small can be staked. Any feedback would be very much appreciated.”

See! you’re not the only one! Firstly, the costs are not costs in the sense that they are paid by the delegators (you) directly. The idea is that the costs, which are a flat 345 ADA every epoch in which your pool creates a block, are deducted from the block rewards by the pool operator to cover their real world operating costs. These costs are things like electricity and server fees.

When the epoch cost and the pool’s margin has been deduct the rest is split between the delegators and distributed as block rewards. This is when you’ll see the total rewards in your wallet start to increase.

If you want to learn more about staking pool costs and how they work then check out the reply to the question above by Ahmad Alkilani on the Cardano forum. He explains it in more detail with an example which some might find helpful. Check it out here.

So what is the pledge amount then?

Finally, you come to the pledge amount. This number shows you how much ADA the staking pool operators themselves pledged to the pool when they started operating. It is generally accepted that pools with a higher pledge amount are more likely to create a block during an epoch. However, choosing a smaller pool will potentially yield a larger reward if that pool does create a block, because there are fewer delegators for the rewards to be distributed between.

I’m sure this article has helped to clarify the information presented when trying to decide which staking pool to delegate your ADA to. If you’d like to find out more or even just say hi we’d love to see a tweet from you @Upstream_ada. We’ve also got video versions of most of our blogs over on our YouTube channel so go ahead and get yourself over there and subscribe for more Cardano and crypto content.

Any cookies that may not be particularly necessary for the website to function and is used specifically to collect user personal data via analytics, ads, other embedded contents are termed as non-necessary cookies. It is mandatory to procure user consent prior to running these cookies on your website.